The big Open Source javascript front-end libraries have not only conquered the hearts of developers around the world. They were originally made to be executed in the user´s browser, but they are busy conquering the server as well - so to speak.

Angular was the first to cover the full stack with its MEAN stack - using a combination of MongoDB, Express, Angular and Node.js. Then React followed suit with its MERN stack, where the A was replaced with a R for React. Now the third big front-end js-library in the world, Vue, would also like to have a piece of the action with the MEVN stack. And a logo has been designed. 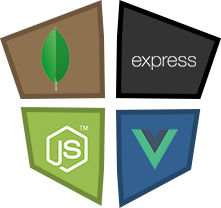 Vue - also referred to as Vue.js or VueJS - is much more popular than both the first and the current version of Angular measured in stars on GitHub. In fact, Vue has second most stars among all js-libraries worldwide - solely surpassed by React. But Vue has not become «full stack» until the last few months.

One relevant hit in danish

A search on Google shows, that there are many articles on MEVN. See table below.

However, Denmark shines with its absence. A search for MEVN on Danish websites returns only 282 hits. The 281 being even about everything else than the MEVN stack. The only IT-related reference about the term happens to be provided by JLKM.dk, the website run by yours truly. See Figure 1. 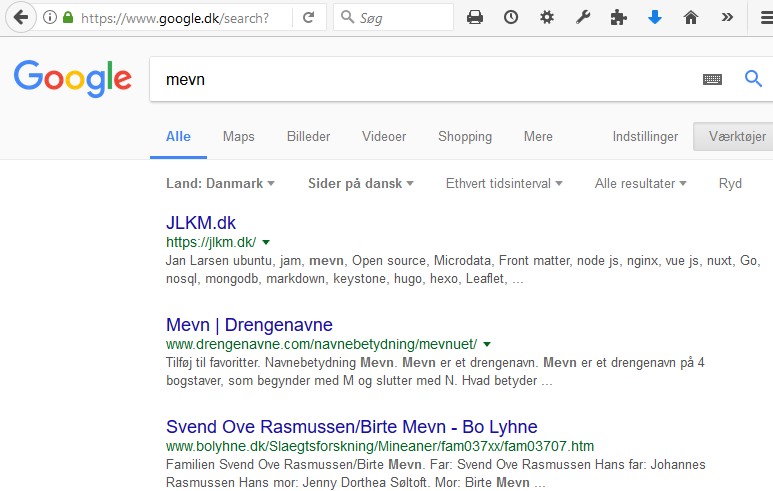 If you narrow the search in Danish into «mevn stak», even Google is no longer capable of finding any documents at all. Instead, it returns four Danish hits about «MEAN stack» (stack in english). Still, only one contribution from JLKM.dk is relevant. See Figure 2. 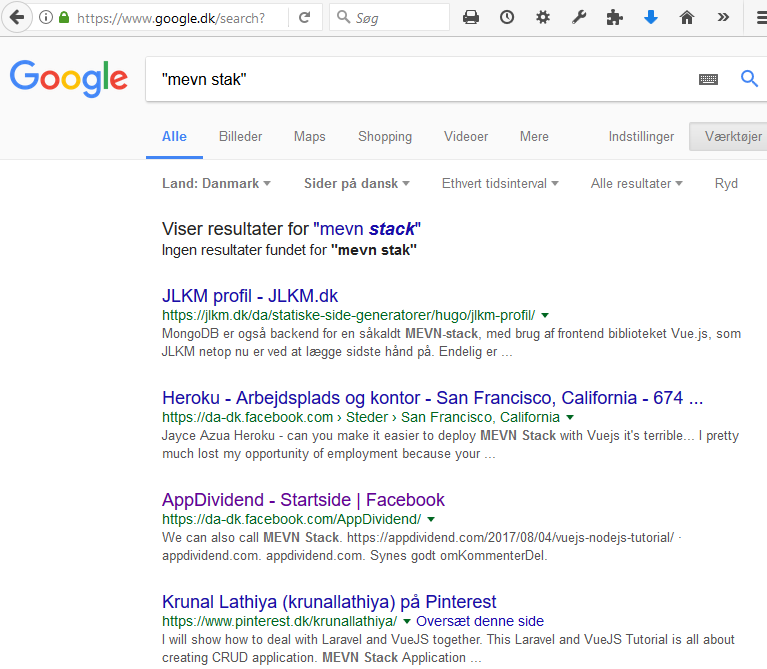 One danish MEVN stack up and running

There might be danish MEVN stacks out there. But at present it would seem pretty justified to remove the cautious question mark from the headline. Hence, a danish MEVN stack has turned up, and it is (of course) available at MEVN.dk.

The site is a module, where users can post to Udvandrerne.dk, StaticSiteGenerators.dk, NoSQL.dk and the other sites provided by JLKM.

The focal point of the system is of course Vue.js, which is often characterized as a merger of Angular and React. The supporters of Vue would like to add, that it also happens to unites the best fetures from its two competitors. These are the easy-to-understand templates with {{variables}}, that Angular has been the advocator for, while Vue also contains the insanely fast virtual domain for which React is known.

From a blog in chinese to a CMS in english

The basis for MEVN.dk is a GitHub repo belonging to Shen Chen from New York. It was chosen for a number of other MEVN libraries due to its closely integration with Nuxt.js, which is Vue´s tool for rendering the html on the server. This is also called server side rendering (SSR) and makes sure (more sure at least), that search engines get it all. This is an incredibly important feature, and it is also one of the main reasons, why more and more of the process of serving a website is handed over to front-end libraries.

However, Shen Chen´s library is a relatively simple system most suited for a personal blog. In addition, all text on the web is written in Chinese. Therefore, it was a major task to translate everything into English (just to see what was going on). Next challence being to expand the system for use in a wider audience and for handling far more documents in a transparent way.

Out comes a CMS/forum with addition of the following new features:

All contributions are sent to the MongoDB document database, which has been voted the best on the market.

Mevn.dk runs on a small server with Ubuntu 16.04 LTS, so the system does not require much server power. The setup includes installation of MongoDB and Node.js and associated js libraries. Operating costs are kept to a minimum, as all the elements in the MEVN stack are open source - and therefore free of charge.