Angular, the AngularJS-successor, still gets twice as many downloads. And React resides on its own «planet» with a staggering 1.5 million downloads per week. However, by surpassing AngularJS in downloads, Vue consolidates the status as being one of «The Big Three» js-front-end libraries. 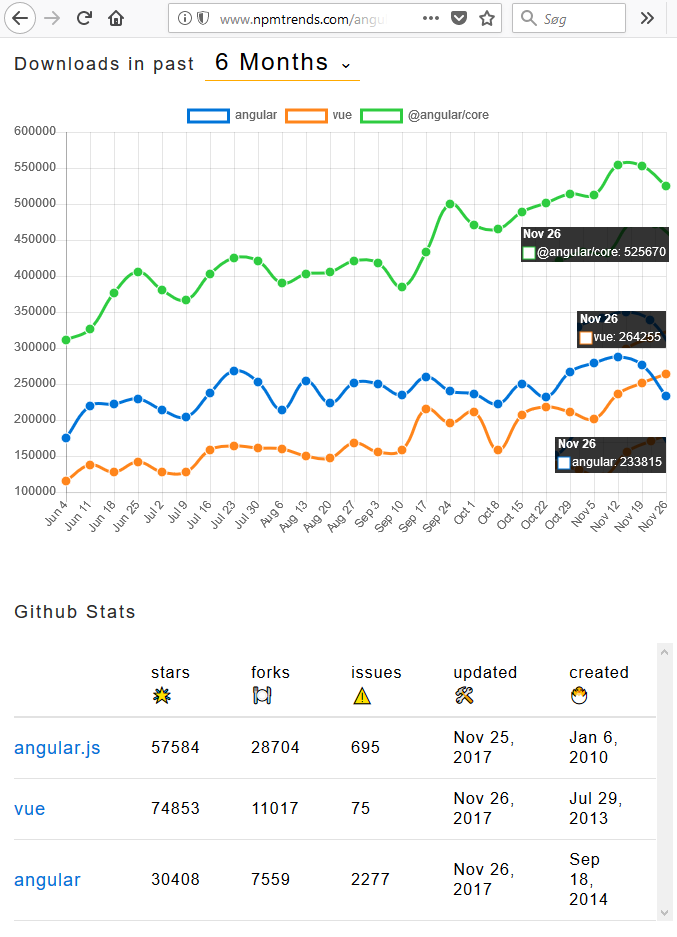 Trends from the last six months in NPM-downloads of Vue, AngularJS and Angular. Please note, that Angular on the graph represents AngularJS/Angular1, while the number of Angular/Angular2+ downloads are measured by Angular-core downloads (according to common practice).

When it comes to popularity, the two Angular libraries/frameworks haven´t been a match for long. Half a year ago, Vue, also referred to as Vue.js and VueJS, passed AngularJS with regards to stars on GitHub. In this field the new Angular has always been left far behind by both its predecessor and Vue.

Vue even expands its lead in this field. Since Vue and Angular swithed star-rank on Github, Vue has received 18,000 new «GitHub-likes», as AngularJS and Angular have to settle with respectively 1500 and 6000 new stars during the same period.

Last year 26,400 new stars won the battle for Vue - with React coming in second (+22,900) and Angular fourth (+18,900). But this year Vue has even increased its award-winning «star-speed» with 50 pct. This trend only calls for one last question: When will Vue surpass React as the most starred js-library of all time, and will it happen before 100,000?

From popularity to usage

Still, as in many aspects of life, what you think isn´t necessarily consistent with, what you do. Developer-likes on GitHub is one thing. Usage on a daily or regular basis is quite another. Thus the number of downloads delivers a precious insight into the latter.

In June 2016, world-wide web developers downloaded AngularJS 5 times as often, as they did with Vue. This is easily confirmed by expanding the graph from above to a 2 year period. But, as it appears, this head start has been all catched up in a year and a half.

Apparently, at least some interchange between popularity and usage has taken place.

Another race is on.