Vue has now taken the lead over Angular, when it comes to adoptance among developers around the world. 20 pct. indicate, that they stick to Vue, while Angular has to settle with a share of 19 pct.

According to «State of JavaScript 2017», published this night, 4647 out of 23.704 respondents are in favour of Vue, when 4449 prefer Angular. Thus the table has been turned around between the two heavy weight front-end libraries. In last years survey Angular came out on top with 13 pct. compared to 10 pct. in favor of Vue. 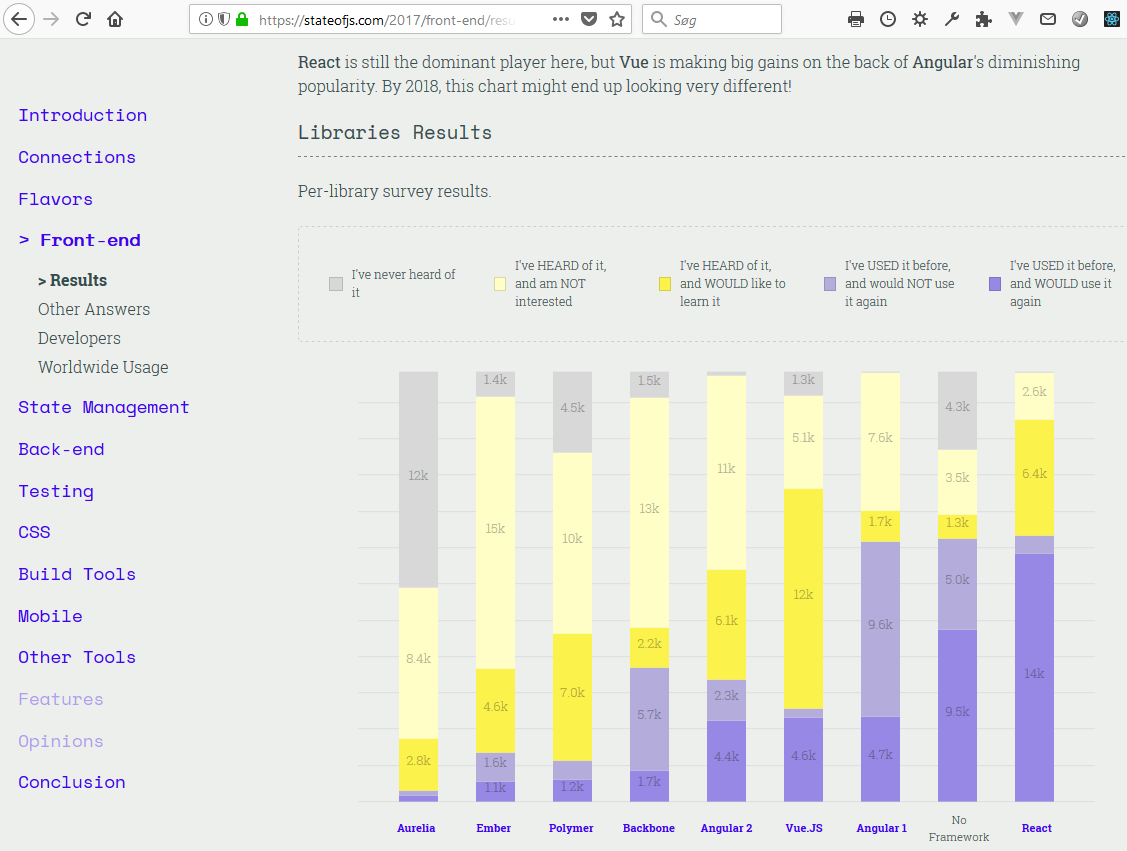 Still, React leads the pack by far, as was the case last year. 13.669, equalling 63 pct., state, that they have used React and intend to continue doing so. The Facebook-connected library even manage to expand the lead from a share of 53 pct. in 2016.

Hence, it seems the present front-end-king has secured its position, when its predecessor, AngularJS, continues to loose support. This year AngularJS, also referred to as Angular 1, is getting support from 20 pct. of the developers worldwide. Just like Vue. That´s a huge setback compared to 30 pct. in 2016, and «the old» Angular barely came in second this year. Surpassing Vue as third with only 0,3 pct.

Sympathy may have turned into actual use

This shift may be due to the fact, that the Angular family has a churn rate much higher than its competitors. Even in 2016 a relatively high number of developers indicated, that they had turned their back on Angular. Unfortunately, this trend continues and even strengthens. In 2017 4 pct. state, that they have ditched Vue, and the same goes for 2 pct. of the developers using React. But in Angular´s case you have to put a zero behind those numbers. This year 10 pct. indicates, that they have abandonned Angular, as is the case for 40 pct. of the Angular 1 developer-base.

Another year with that kind of beating, and Angular, both the present and the original version, will come in as third and fourth choice among the world´s front end developers. Quite a deroute for the former, and Google supported, front-end-king.

On the other hand it looks more and more, like Vue has conquerred second place for good. This has been the case since June 17 in terms of stars on GitHub. And recently Vue has also surpassed at least Angular 1 measured in downloads on NPM. The recent survey indicates, that the a somewhat fluffy popularity actually can be transformed into waterproof reality. At least when it comes to Vue.

However, Angular is not the only front-end library having trouble keeping momentum. Same goes for several rather well-known libraries.

This is certainly the case with Backbone, which attracted more support than Vue according to the State of Javascript 2016. The support for Backbone has decreased to 7 pct. this year, apparently due to a huge churn rate. Likewise Ember has experienced a decline from 8 to 5 pct., which is also the present level of support for Polymer. Last place in this years front-end comparison goes to Aurelia, which is used by just over 1 pct. of the world´s developers.